0.8.7 Rise of the Mutants (Halloween Update)

This was supposed to be a small and fun scenario for Halloween, but I might have been carried away. Just you know, a bit. So, here is both a new scenario and a fairly chunky update for you to enjoy!

As usual, full changelog at the end, save-games and mods compatible.

Rise of the Mutants

Let's start with the main attraction. RotM is a new scenario for ATC where you play as a group of mutants in search of their origin. It's not just a quick reskin, this scenario is designed to showcase what can be done in a week of work (and testing) with my engine. 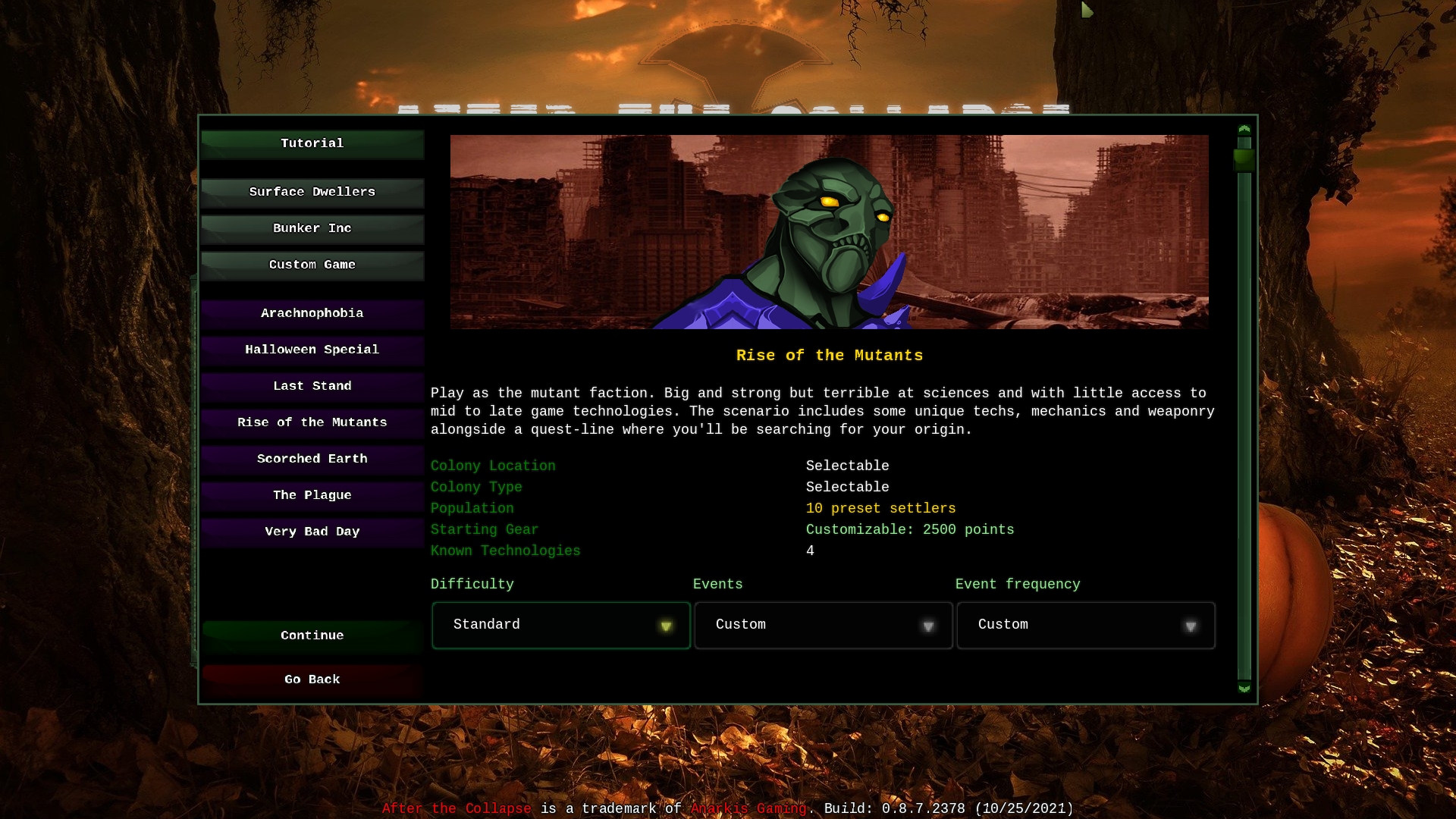 (a note before we start: this scenario features cannibalism and a quest with some non-kid friendly content, nothing that's out of character in a fallout-ish game, but I'd rather mention it.)

So, the mutants, which are not inspired by any other mutant from any other franchise, definitely not, are big, green and mean. On the plus side, they have super human strength and endurance, an immunity to scorched biome and acid rain debuffs, increased melee damage, HP, and have a natural resistance to damage. They are excellent fighters and can one-on-one most mobs in the game even without fancy armors or guns. Oh, and they have no philosophical problem with eating humans, on the contrary. 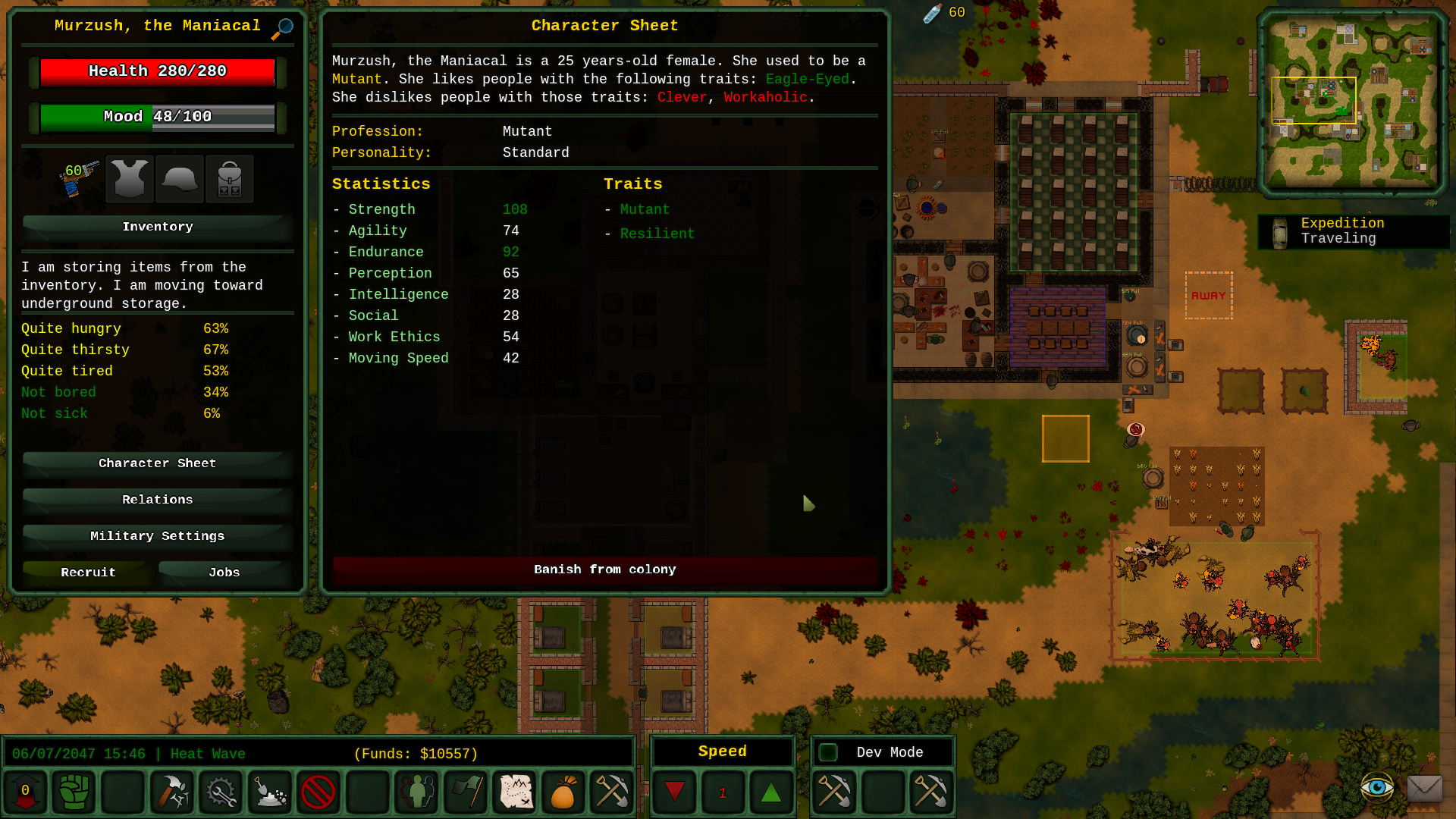 On the negative side, they eat and drink more (20%), they are god awful at medicine and science. Most of the tech tree beyond electronics is closed to them. No robotics, no drones, automated kitchen, advanced turrets or modern weapon/armor repairs. They however start with exploration and animal care unlocked immediately and have access to unique bone melee weapons and armors. The weapons have a very high chance to incapacitate a target, and the armor is very good for its cost (better than the metal armor). 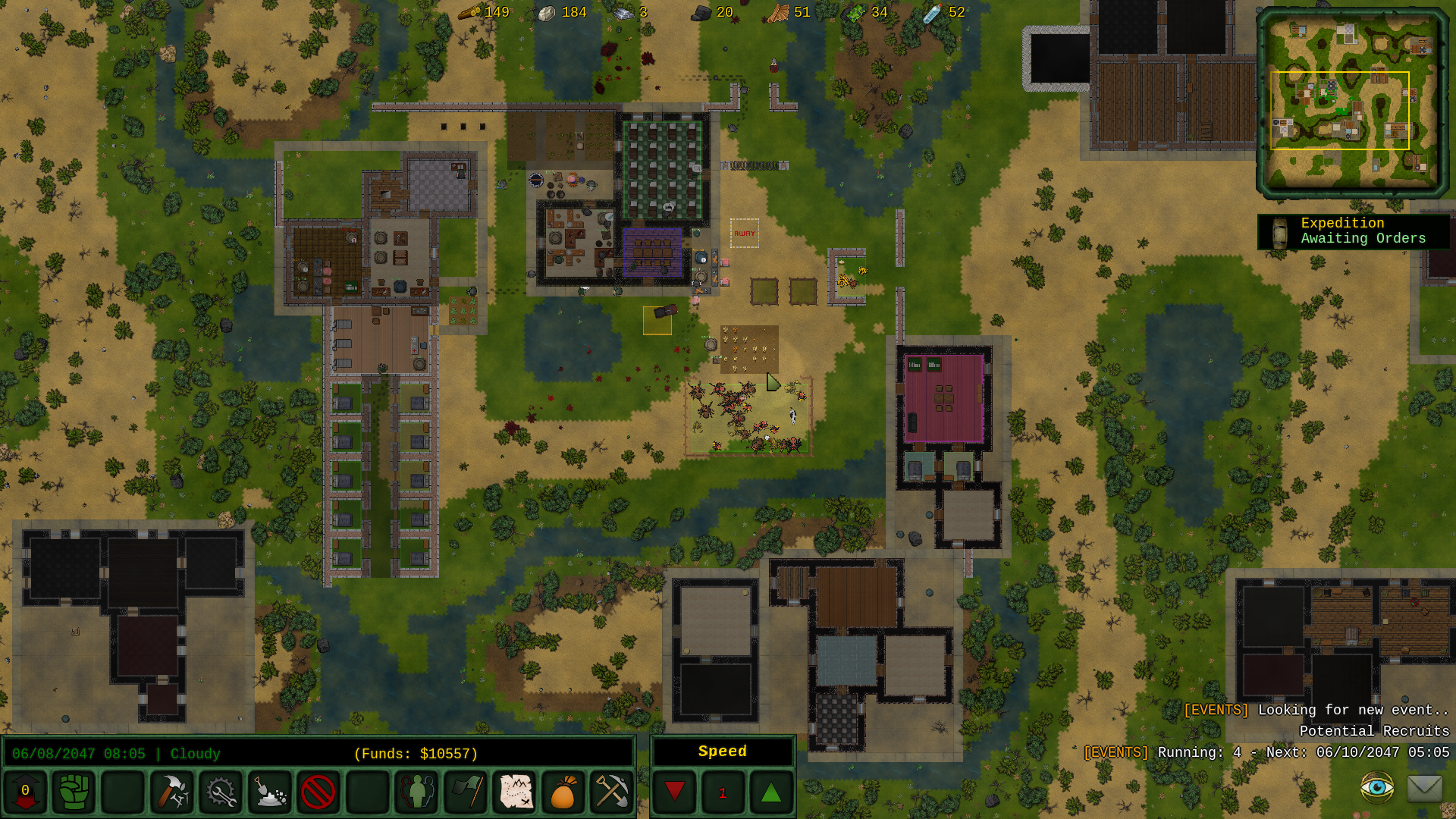 They also are quite asocial and will brawl and fight each other a lot. Keeping them content is quite difficult but it is not as bad as it sounds. The "depressed" mood doesn't apply to mutants. Instead, they become "agitated". An agitated mutant will brawl even more, but will also be stronger, get a military skill boost, and will be better at all jobs involving razing something, however they'll be slower builders in this state. 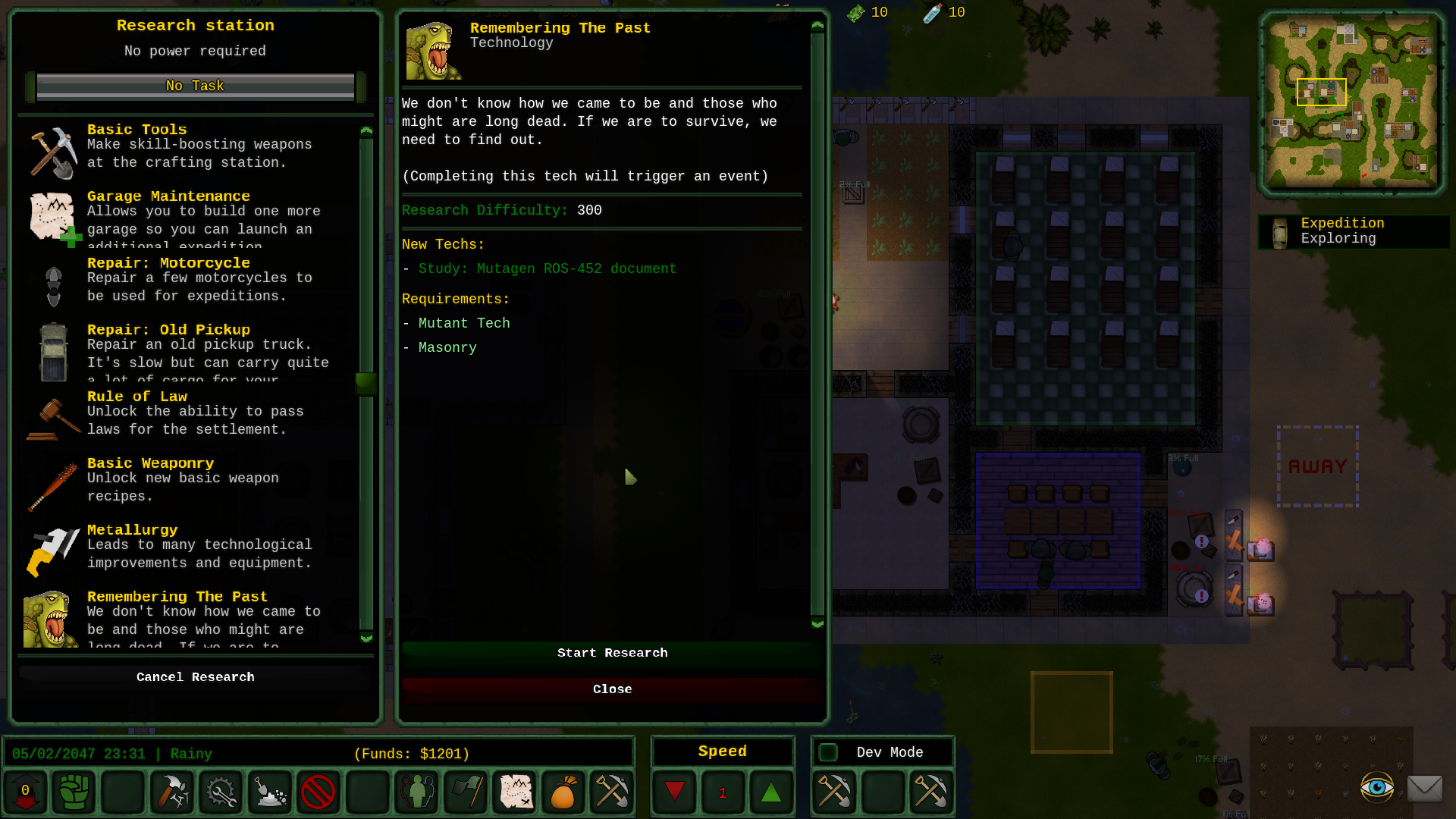 With a very slow research rate and no easy access to the high-end tier, they are meant to be played as a low tech faction relying on numbers and animals to defend themselves against raiders and other factions (speaking of which, Neo Roma is perma-hostile to you here, it's a feature, not a bug).

A few words of advice:

I hope you'll enjoy this scenario and quest, it's still a bit clunky and the writing is, well.. mine (who isn't a native English speaker), but it should still give you a window to what will be done in the future. :)

Of course, it wouldn't be an update without the usual list of changes and improvements. I will list a few of the most notable ones here.

Previously, it was notably difficult to keep incapacitated enemies alive. I made that a tad easier: your survivors should be a lot faster at noticing they shouldn't shoot at their target anymore (assuming they aren't blood-thirsty) and newly incapacitated people get a few seconds of invulnerability so they can soak up bullets that were still flying at them (only if your faction menu is set NOT to attack incapacitated people).

Fire will also properly stop at walls now, no matter which tile those walls are built upon. It does make very large fires a bit more taxing on the CPU, though. Nothing dramatic, but it was the reason why it didn't work that way before. Speaking of fire, sand crabs are now immune so they stop burning themselves to death.

Oh, fun little fact, animals now get an unique name (well, from a list) the first time they get adopted by a survivor. Mutants also have their own name generator.

And as usual, I also included many new UI improvements and fixed a bunch of bugs.